I've had one of these lying around for years. Picked it back up recently and the trigger was horrible, almost unusable. So I took it apart of course. There's a single pin that holds the two halves together and drifts out with a 3/16" punch: 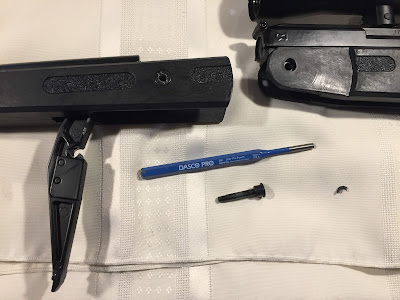 This also allows the action to be removed from the stock. Here's a picture of the "roller" sear with an arrow showing the point of contact: 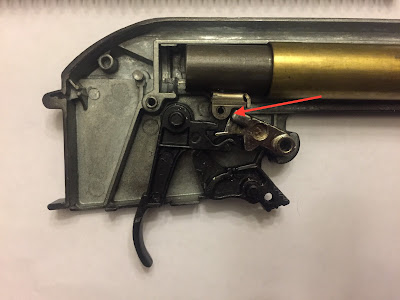 Note the main spring is removed here to show what it would look like cocked. Also, I recommend disassembling with the right side down, opposite of how it is shown here. That requires removing the four screws and then flipping the action over before removing the left side up and off.
My roller was no longer rolling at all; some WD-40 solved that problem. I also cleaned up the face of the lower silver part with 220 and 500 grit sandpaper. It appeared the face had been dinged by the roller not rolling. Here's a shot with the trigger spring in its proper place, mine went flying upon disassembly and it took some time to figure out how it goes back. I recommend reassembly on the right side, again opposite of what is shown here, as it makes things a little easier. 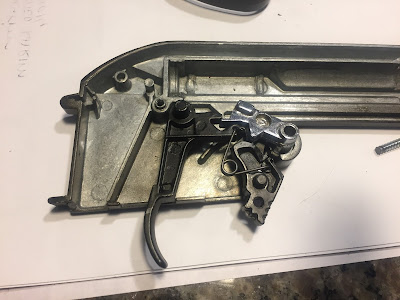 I emailed info at marksman dot com to no avail to ask about this, so I hope this proves useful to someone out there. The trigger is so much better now.
Posted by drb80 at 11:54 AM

Hi. I am the "someone out there" for whom this is useful. Like you I have had one of these rifles kicking around for some time. I have recently resurrected it & like you I find the trigger pull unacceptable. Mine is no longer a biathlon replica as I have just fitted it with a BSA 4X32 scope & removed the front sight completely. It is now fitted with a 14.5mm to 1/2" UNF silencer adapter & a 1/2" UNF thread protector. Next stop is to follow you with the trigger work.
All the best,
Peter Monk (AKA Thelonius9a)